The 5 Must See NZ Films 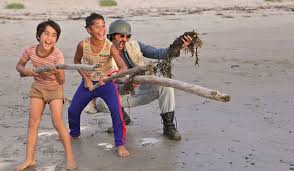 So, you fancy watching a slice of NZ? Look no further than our staff top 5 picks, that really are compulsory viewing. You’ll see our Kiwi culture past and present woven throughout these amazing films. Enjoy!

#1 Hunt for the Wilderpeople

This is a fantastic comedy and coming-of-age story. Two thumbs up!

Taika Waititi’s second feature film (after Eagle vs. Shark and episodes of TV’s Flight of the Conchords), is a coming-of-age comedy set in the ’80s, East Coast, New Zealand.

A touching and very funny film, set among a very NZ landscape.

From Roger Donaldson (Smash Palace), the true story of Burt Munro (Anthony Hopkins) from Invercargill who set out to set the land speed record at the ripe old age of 68.

A gripping flick that is sure to please the family.

On the east coast of New Zealand, the Whangara people believe their presence there dates back a thousand years or more to a single ancestor, Paikea, who escaped death when his canoe capsized by riding to shore on the back of a whale. From then on, Whangara chiefs, always the first-born, always male, have been considered Paikea’s direct descendants.

This one simply must be seen to be appreciated for its beauty.

The hard-hitting New Zealand classic about a violent and troubled family in South Auckland, based on Alan Duff’s novel. Directed by Lee Tamahori and featuring a towering performance from Temuera Morrison as Jake the Muss.

Well this one is not for the faint hearted. Definitely adults only material. It is one of the most well-known NZ films.

Settling into a new country is a unique experience. Intertwined with the hope for a better life, migrants come to New Zealand for countless reasons

When will the NZ Border open?

On 19th March 2020, prime minister Jacinda Ardern announced border restrictions for all non-citizens or permanent residents in response to the outbreak of COVID-19 (COVID).

Canada v New Zealand. Which is easier to migrate to?

A comparison between Canadian and New Zealand immigration policiesby Shiv Deepak, Licensed Immigration Adviser (NZ) Today, I would like to share with you some differences between